Pontine Islands and the Tyrrhenian Sea.

Sterna, true to its maximum that the best places are those that can only be reached from the sea, has chosen the archipelago of the Pontine islands of the 2015 summer season. Declared World Heritage by UNESCO, here the sea, the nature, and the landscape of these “fisherman isles” surrounded by the Tyrrhenian sea, truly breathtaking.

On board Sterna we combine navigation training with tours of remote, pristine and unique corners of the Mediterranean. On the crossings between islands we will work on knowledge and sailing skills. We will learn and perfect maneuvers, sail trimming, radio communications and how to interpret and apply  weather forecast while on route. Once ashore our carefully chosen excursions offer insight into the environment, culture and history of one of the most beautiful areas of our Mare Nostrum.

At Sterna we believe the journey is as important as the destination and so between island and island the wind is our protagonist and our goal to help all on board discover the pleasures of sailing. Once anchored, we will explore the myriad of sea caves, grottoes, minerals cliffs and idyllic beaches that the Pontine islands have to offer.

(A week does not give time to see all the places described here. The weather and group dynamics will determine the exact route)

Naples:
Museums and culinary tradition. Naples will be Sterna’s homeport and starting point for navigating the Tyrrhenian Sea and the Pontine islands.The Museum of Naples houses many of the archaeological remains found on the Pontine islands such as “Il Mamozio a” a 3,000 year old Etruscan statue found in the port of Ponza.Stazione Zoologica houses one of the oldest aquariums in Europe and displays  the impressive marine biodiversity of the warm  volcanic waters of the area.The “cucina napoletana” is a fusion styles, traditions and culinary customs due to the numerous invasions suffered by the city of Naples throughout its history. We suggest dishes such as napoletano crostino, Neapolitan ragù, Parmigiana or sfogliatelle just to name a few.

Ponza:
Coves and Caves: The archaeological sites of Ponza, the largest island of the Pontines include places like the “Blue Grotto”, carved into the cliffs by the Etruscans or the Beach Chiaia di Luna connected with the town of Ponza by a underground tunnel dating back to Roman times.

Ventotene:
The island and its surrounding have been declared a marine reserve. In the nearby island, Isola di Stefano, is a former prison where Mussolini sent his political opponents

Zannone:
When hiking around this island, part of Parco Nazionale del Circeo, you can appreciate Mediterranean nature in its purest form as Zannone is one of the few islands that retains its original natural vegetation.

Palmarola:
With its caves (grottos in Italian), quaint houses carved into the rock face or the “sea caves Cathedral” Palmarola natural marine reserve is, according to the famous French sailor and oceanographer Jacques-Yves Cousteau, the most beautiful island of the Mediterranean.

Ishcia:
Hot springs and hiking: Ischia Thermal tradition is rooted in legend. It is said that the giant Typhon was imprisoned by Zeus in the bowels of Mount Epomeo . After centuries of punishment he implored Zeus for forgiveness. The hot tears that emerged from the eyes of the repentant rebel touched the father of the gods who forgave Typhon and his tears became the hot springs found allover the island. There is a wide range of hiking trails around the island raging from geology focus to wine and food.

Procida:
This small island near the Neapolitan coast retains its charm and tradition. There are some great restaurants in the harbor where, according to the locals, you can eat of the best “pasta alle vongole” in Italy. To the southwest of the island there is a large bird reserve.

Capri:
The mythical Island of the Amalfi Coast, famous for its “jet set” and charming villages with streets paved in marble. At the tip Northwest lies the Blue cave where, where weather permitting, we will explore by dingy.

What is included - what is not included (PDF) 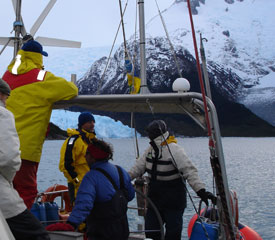